In July of 1993, a dream of a local community theater was born and a fledgling group of actors presented Rainmaker in cooperation with the Lake City Community Theater. Then, in November of 1993, the fledgling group of actors went solo and presented A Funny Thing Happened On The Way To The Forum and High Springs Community Theater was born. During their 1993 -1994 season, this new theater group presented five more plays.

High Springs Community Theater was officially incorporated on August 1, 1994 by the founding officers, Graham and Diane Williams. Jeannette Peters and Jim Gabriel, both prominent residents of High Springs, were members of the first Board of Directors. Soon, the theater entered into a formal usage agreement with the GFWC High Springs New Century Woman’s Club.

From 1993 through 2001, HSCT staged thirty-nine shows at the GFWC High Springs New Century Woman’s Club. During those years, HSCT expanded the stage area and added a small lighting booth at the back of the meeting room. A green room was also enclosed along the back of the building. The final contribution that HSCT made to the Woman’s Club building was the addition of a beautiful lobby and two restrooms. With the addition of the two restrooms, the theater group was finally able to abandon the practice of having to rent porta-potties to place in the side yard during the run of each production. What a relief that was!

But alas, both organizations were growing at a steady pace, and their activities were increasing, leading to some scheduling issues, so HSCT started looking for another venue. They located and purchased the building at 130 NE First Avenue in High Springs in October, 2001. Thus, through the generosity of the community, sponsors, and dedicated patrons, HSCT realized the dream of owning their own building. In previous years, the building had housed several businesses and churches and become known as the “pink church”. Now HSCT was prepared to transform the building into a theater.

In October of 2001, HSCT presented Calamity Jane, their last play presented on the stage of the New Century Woman’s Club. They took possession of their new building in January, 2002, and a flurry of activity ensued. Under the direction of Tom Solomon, owner of The Rustic Inn, and largely through his hard work, the interior of the building was modified to add a stage and to provide a tea room, green room, and dressing rooms.

On February 21, 2002, an open house and ribbon cutting ceremony was held to celebrate the theater’s move into their new building. A week later, HSCT opened Man of La Mancha, the first show to be presented on their new stage. The theme song “The Impossible Dream” from the show epitomized what HSCT had accomplished in obtaining their new venue.

A special program that HSCT started in its first year was the Summer Youth Production,and it continues today. Through the program, young people from ages 8 to 18 are given the opportunity to participate in presenting a play on stage. For many years, the directors, stage managers, crew, and technical staff for these shows were adults.

In 2004, the Board of Directors decided that the Summer Youth Production should become a full workshop for the youth of their communities. Starting with that year’s show, Beauty is a Beast, the directors, stage manager, crew, and technical staff were all young adults. Two adult advisors were assigned to help, but the show was totally produced by the young adults and their cast. Shanna Swiers, Director, and Emma Harbert, Assistant Director explored new territory for the youths involved in the HSCT Summer Youth Production, and they blazed a magnificent trail. The Summer Youth Production continues to be a much anticipated focal point of seasons at HSCT.

When the building was purchased, both of the restrooms in the building were behind the stage area, so once again HSCT was in need of restrooms for their patrons. Thanks to many fund-raising efforts and the continued support of our sponsors and patrons, at the beginning of 2006 we were able to make final plans for the renovation of our building to include two new restrooms. Ross Ambrose, a local resident, was the project manager and did a lion’s share of the work. Thus, HSCT now has two very beautiful public restrooms as well as an enlarged green room and upgraded dressing rooms.

In the last several years, HSCT has attracted many new faces both to their stage and in their audiences. They continue to plan for additional improvements to their building and are developing programs to welcome more people from the community into their theater family. They have expanded their program so they present five main stage shows each year as well as the Summer Youth Production.

In 2011 HSCT changed its name to High Springs Playhouse (HSP). This was done at the suggestion of one of our board members who realized that townsfolk would frequently use the word ‘theater’ when referring to both the movie theater in town as well as our community theater. “Playhouse” says what is going on inside and makes us unique in our town. It also shortened our website name considerably!

So keep your eyes on High Springs Playhouse as we continue to grow and continue to bring fine family entertainment to our community. 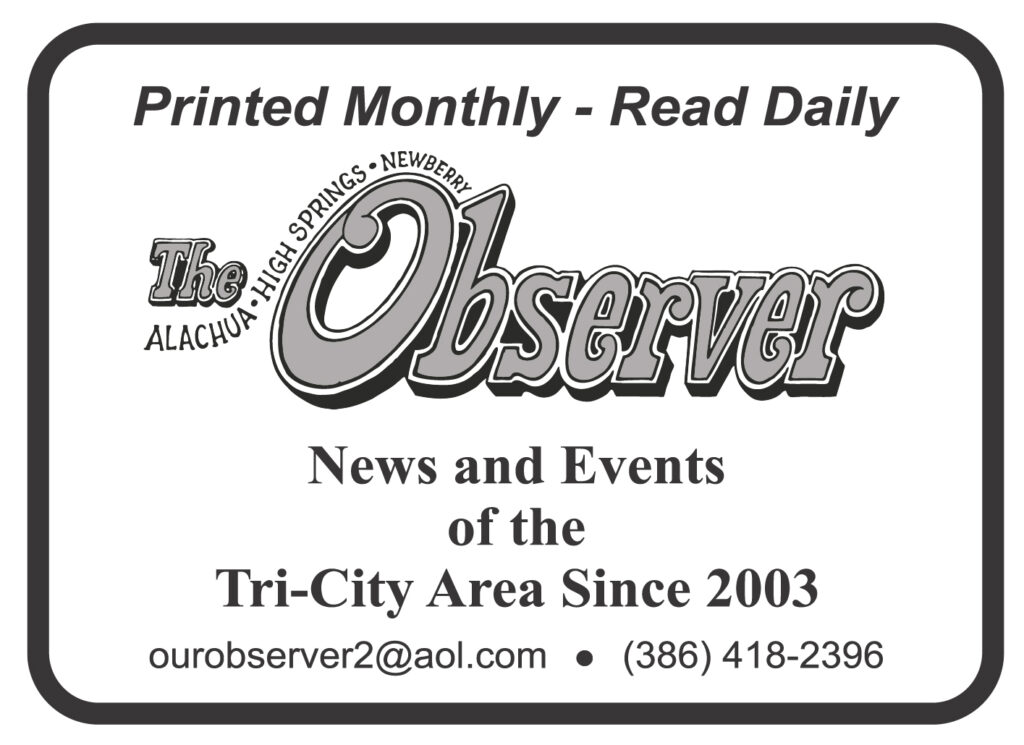